This trip originated with the goal of Sunlight Basin. The end result was bittersweet; inclement weather made for a change in plans, but the end result definitely made for a memorable trip...

Sunlight Basin is located in the heart of the San Juan Mountains. More specifically, in the Needle Mountains. I had some other destinations in the San Juans before my backpacking leg, so my trip started near Lake City at a camp called Redcloud, where my wife and li'l girls were attending a family camp while I traipsed around the San Juans. See "Destination: Sunlight" for more on the other legs of my journey.

I parted from my family at American Basin along the road to Cinnamon Pass. I went over Cinnamon Pass, then headed down to the Cunningham Creek drainage and Stony Pass. Once over Stony Pass, I dropped down into the valley of the Rio Grande, then up a rough road to Beartown Trailhead. It was definitely a tough road, but I was very impressed with how well my stock 4Runner handled it all. 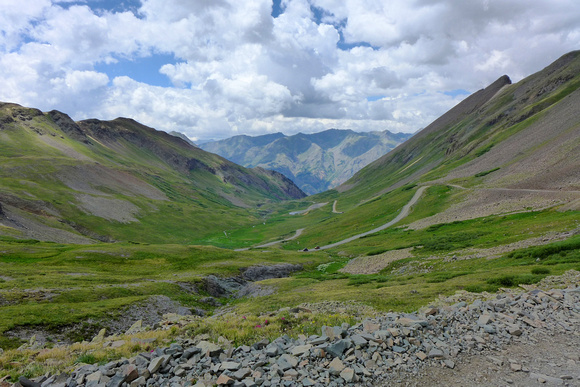 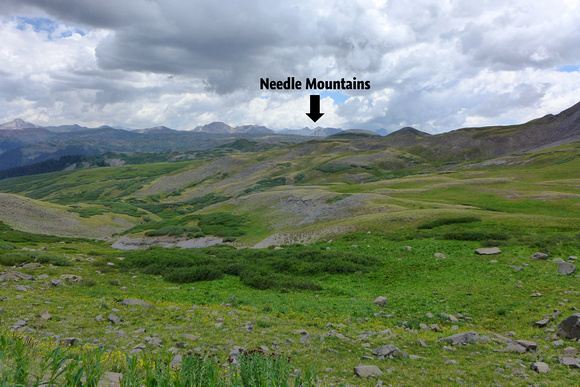 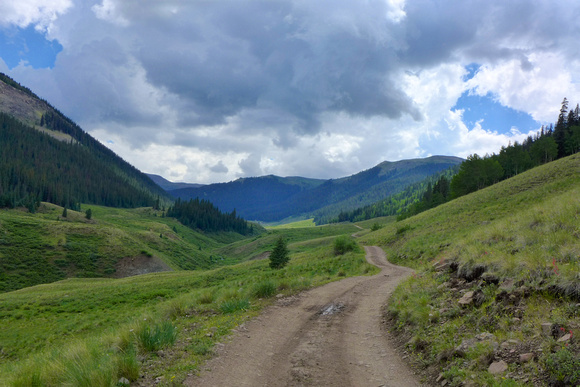 road up Bear Creek (to Beartown) 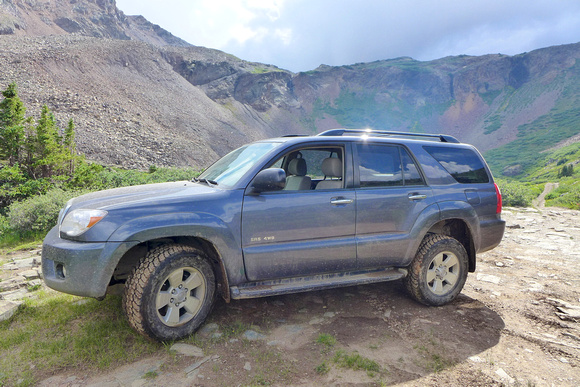 The Beartown Trailhead is actually right along the route of the Colorado Trail. The trail headed up and over Hunchback Pass, then down into the Vallecito Creek drainage. I think they call it Hunchback because the top of the pass is wide and flat. This caused me some concern on my way back over (I'll explain later). The pass itself from Beartown was fairly easy. 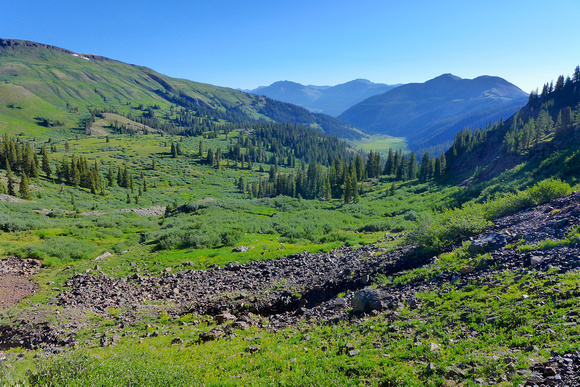 looking east down Bear Creek from trail up Hunchback Pass 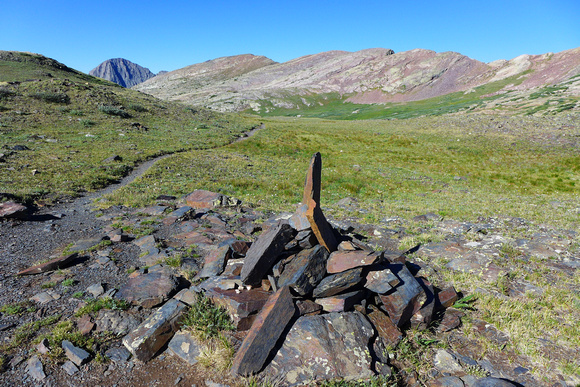 Heading down into the Vallecito Creek drainage was pleasant and offered the first views of the Needle Mountains, which was exciting. 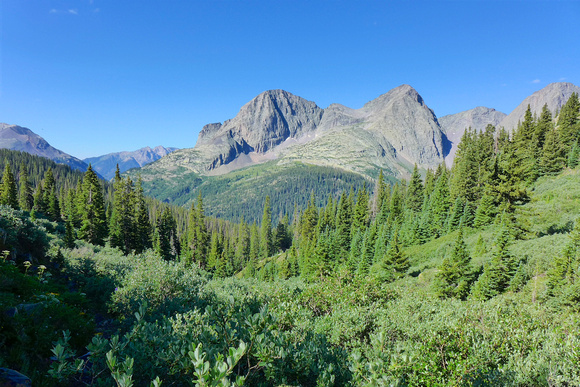 The hike was easy down to Vallecito Creek, where I found a beautiful waterfall and cascade... 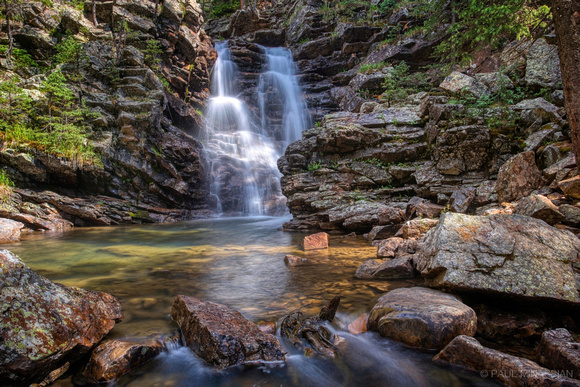 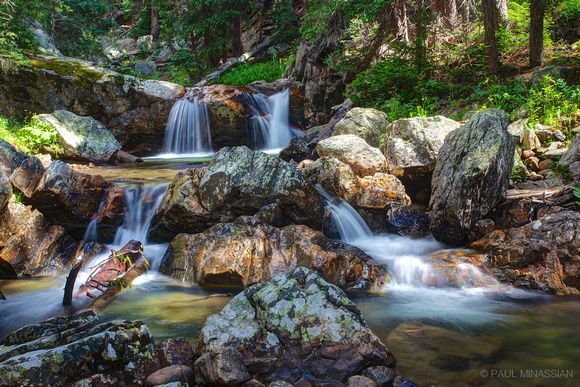 This is where things started to go a bit sideways. I wasn't sure how to get to Trinity Creek, as I knew heading to where Trinity Creek runs into Vallecito isn't the right place. As I headed down the trail looking for some sign of the use trail up Trinity, the rains started (before noon). After a lot of staring at the map and second-guessing, I decided the trail was somewhere along my back trail. I ended up back at the beautiful waterfall, and (thankfully) three hikers were just coming out from Trinity. Turns out — and here's where I laugh at myself — the trail up Trinity Creek is right where I was standing taking the photo of the waterfall! I felt sheepish.

I'd love to say the hike up Trinity Creek was pleasant, but it wasn't. The trail was fine to follow for a bit, not too many deadfalls and such, but soon it ran into a large meadow. And at that point, I lost the trail. It wasn't until my way back down the next day that I figured out where the trail emerged from the meadow (more on that later). So I spend the rest of the afternoon blazing a trail in miserable rain up the middle of the drainage, but the trail was more to the left (south). If you go up Trinity Creek, stay left! And did I mention it was raining? Here's a clip of the fun...

I finally go to Trinity Lake in the evening. It had rained the entire time, including while I set up my tent. After camp was set up, I slept on and off until around 10pm, when I set my alarm for 3:30am and went to sleep for good.

Why such an insane wake time? To climb up the high point between Peak 3 and the Trinity Peaks. I "snoozed" a bit too long after the alarm, and didn't end up starting out until after 4am. Most of the hike was by headlamp. The ridge itself was a very loose scree, which can be a bit of a 3 steps forward, 2 steps back affair. But, at least it was a safe climb, no crazy, crumbling rock cliffs with which to contend. Still, I was scrambling, huffing and puffing because I could see the light starting to show, and I had to get to the top quickly! 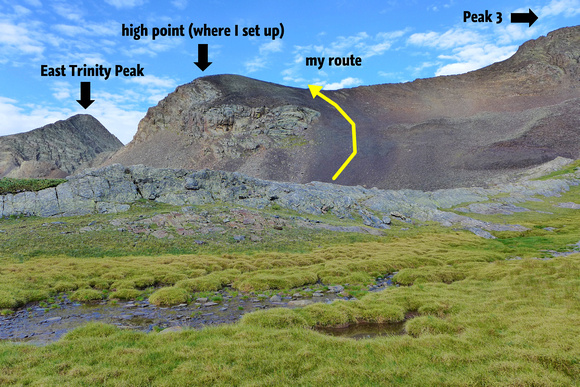 high point where I took photos 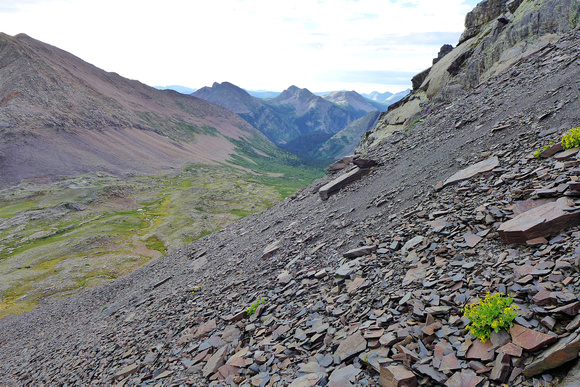 looking down Trinity Creek from scree 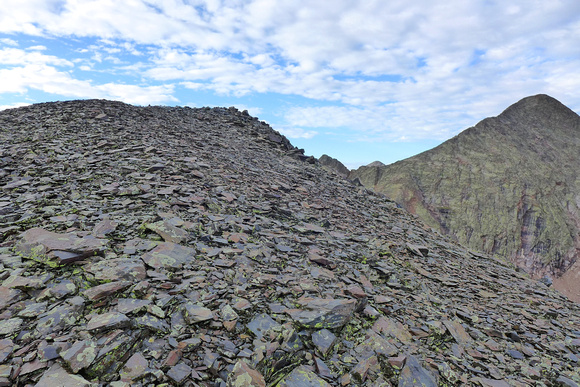 I'll let the images speak for themselves... 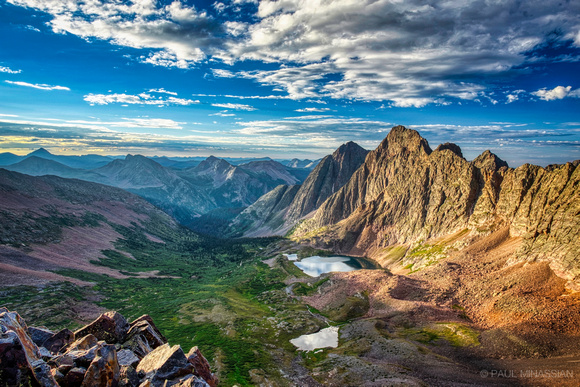 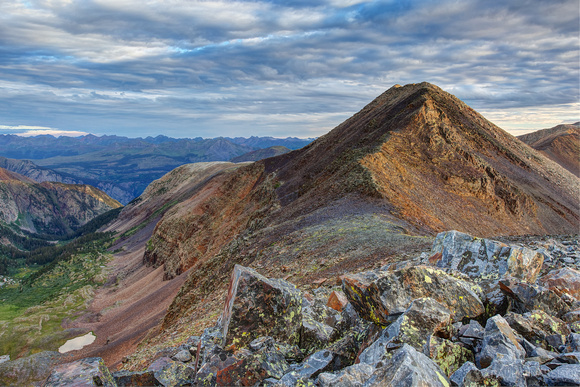 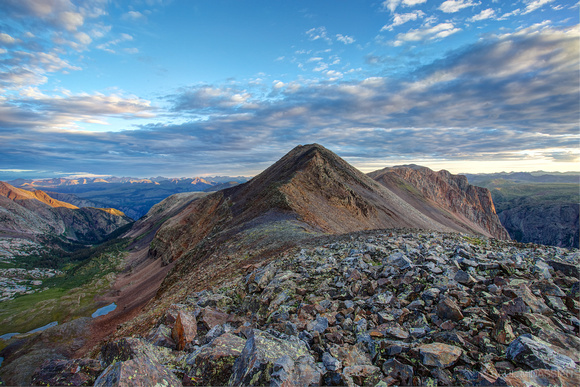 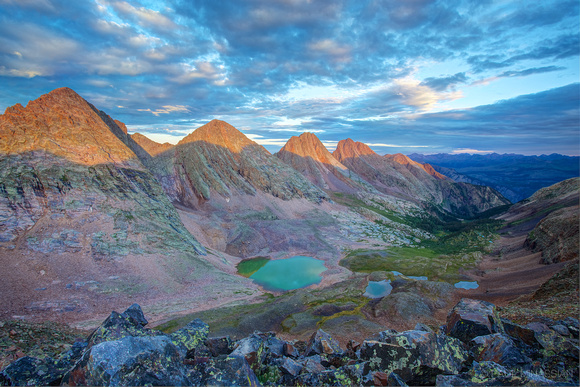 panorama of the Trinities and Grenadiers

High Up in Trinity Basin

Heading back down to the tent was probably the most pleasant part of the trip. The isolation was nice, and there were a series of flat grass parks that were very pretty... 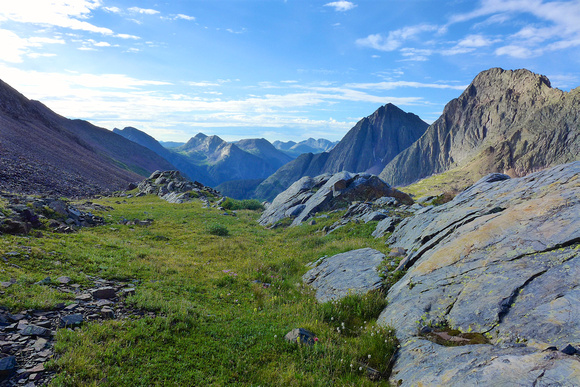 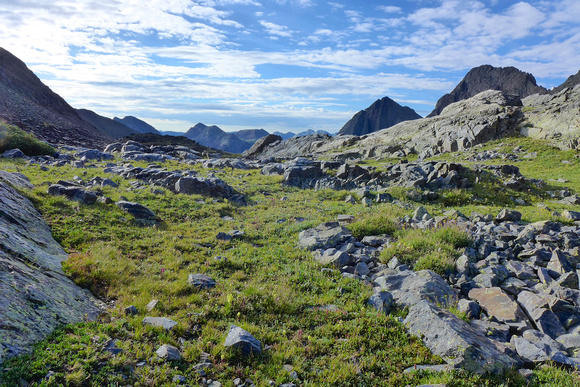 high up in Trinity Basin

By this point I had been in the San Juans for almost a week (see blog post "Destination: Sunlight"), and it was very apparent that most days would see several hours of steady  lightning/rain — much more than the typical fare from years past (which saw maybe 1 1/2 to 2 hours in the mid-afternoon). My plan to head along the crest of the Needles gave me pause. I had to get down to my tent, pack up, head up and over the pass west of Lake Silex and get at least as far as Leviathan Lake before the thunder and Lightning hit. I honestly just didn't know if I would make it, and definitely knew it wouldn't be safe. Disappointed, I knew I needed to stay within my limits and call it off. I bid adieu to the Needles, and headed back down Trinity Creek... 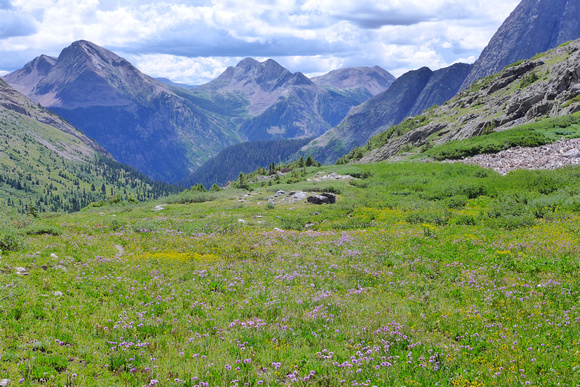 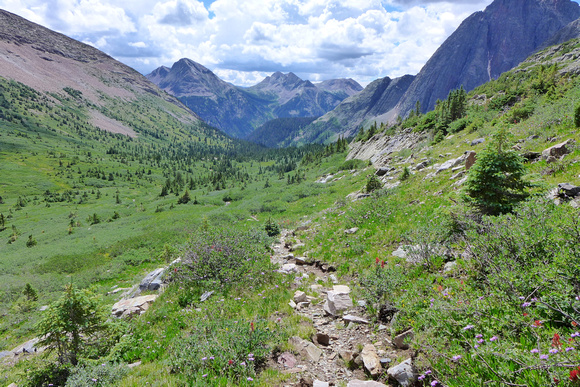 Well, turns out the trail stayed to the south in the drainage. When I arrived at the meadow way down the creek where I had lost the trail, I realized that the trail had crossed straight down the middle of the meadow and disappeared into a thick stand of willows. I had actually scouted within a few feet of the trail at those willows, but missed it. So I tried to set up a couple cairns. Hopefully the next hapless soul won't make the same mistake I did heading up the creek.

By the time I reached the Vallecito, it started raining again. Pouring, actually. I sat under a thick fir for a bit to eat lunch and rest, then headed toward the pass. It was a LONG trip back up the 2500+ feet to Hunchback Pass. It rained the entire time, although it was a steady rain, no more downpours. At one point I had to walk across a very wet log to cross a deep, swollen creek — scariest part of the trip. The rocks I had crossed over coming in were well under water at that point.

As I neared Hunchback Pass, thunder was booming all around. I had a decision to make. If I headed up and over the pass, I'd be back to the truck that night and not have to set up camp one extra night (in the rain). This meant heading over a 12,400 ft. pass in late afternoon — not the smartest thing to do when in the San Juans. And since Hunchback Pass is long and flat and the ridges around it aren't much higher in elevation, it meant a lot of exposure. So I prayed quite sincerely, "Lord, I know this might be foolish, but I'd love to get home to my family earlier than planned since my trip is cut short. Would you please keep the lightning at bay as I go over this pass?" As a parent, there are time I realize my children are making a bad decision, but I choose to protect them within it anyway. I think God did that for me. The hour leading up to the pass, over the pass and down the other side, not one flash of lightning was seen nor rumble of thunder heard. I got back to the truck just as the steady rain turned into a downpour (and the lightning and thunder started right back up where it left off), thanking God for keeping me safe on another great journey.

Sometimes I wonder if I should have tried to head down to Vallecito Creek, then down to Sunlight Creek and up into Sunlight Basin. But then wisdom reminds me that it would have been extremely difficult, and I made a wise decision. I remind myself that falling short of a goal is not a bad thing, especially when weighing the dangers involved in overdoing it. My wife supports my solo journeys, and in return I've promised her that I would always weigh carefully how far I'd push myself.

I think it's a lesson God has tried to teach me a lot, but I can be pretty stubborn. He doesn't expect me to conquer all obstacles — He's the Conqueror, not me. My attempt at conquering a particular route on the backbone of a mountain range is neither here nor there in light of what Christ conquered for me — something I couldn't conquer by my own strength. If you feel led, check out Romans 8. If you don't want to read that much, try just Romans 8:14-39. Still too much? Then just read the next sentence, for all who choose to surrender to the Loving Conqueror, Jesus Christ:

"For I am convinced that neither death nor life, neither angels nor demons, neither the present nor the future, nor any powers, neither height nor depth, nor anything else in all creation, will be able to separate us from the love of God that is in Christ Jesus our Lord." (Romans 8:38-39)