This was anything but easy.

I had seen some cool photos online of Dora Lake in Colorado's Gore Range. I had also read getting there wasn't the simplest task in the world. So I decided to go for it.

Did I say it was anything but easy? 4000+ elevation change in about 5-6 miles over about 10 hours (if I include the multiple stops during the Colorado monsoon lightning storms that kept passing overhead). Bushwhacking through brutal undergrowth and downed trees. Physically, the hardest 2-day excursion I've ever taken, considering my age. When I was in my 20's, probably not a big deal.

The journey starts at the Surprise Trailhead just east of Lower Cataract Lake (not too far from Dillon, Colorado). The trail is pretty easy for the first 3 miles to Surprise Lake. Soon after, it all gets ugly. At an unnamed creek crossing, I turned left off trail. And I do mean off trail. Thick undergrowth, tons of downed trees. And mosquitoes. Holy cow, the mosquitoes. Reminded me of the Sierra Nevada in early summer. Insane.

To make a long story short, I'll just say several hours later I got to Dora Lake. I'll let the photos below do most of the talking. Mouse-over photos for brief descriptions... 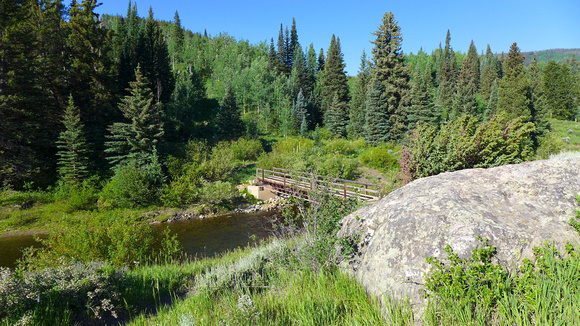 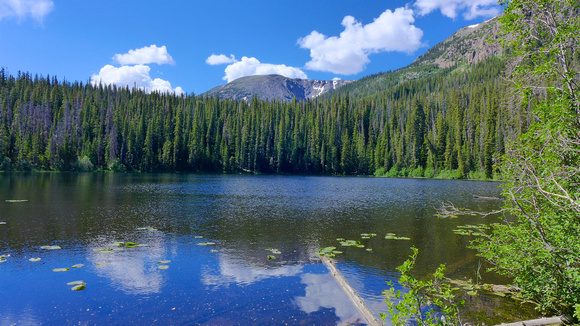 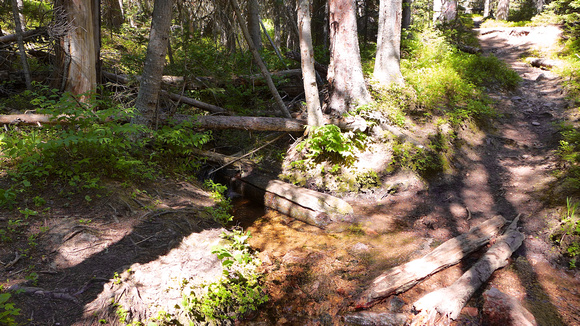 Trail to the right. I followed this unnamed creek into the forest to the left. 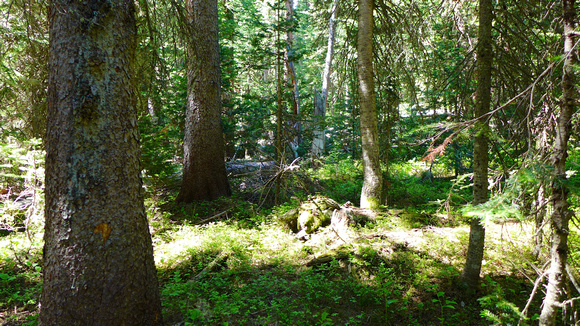 This is what I trudged through. Forever. 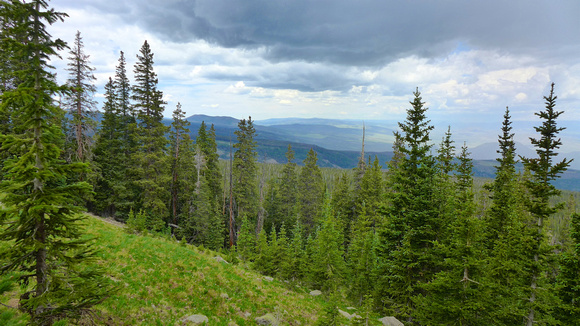 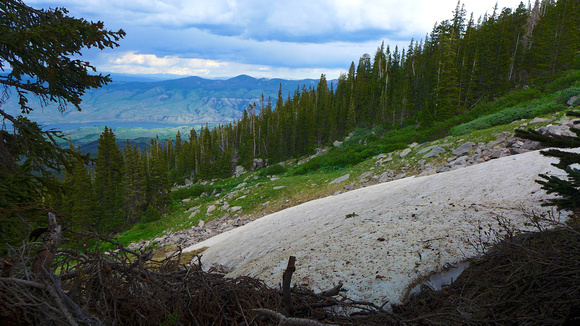 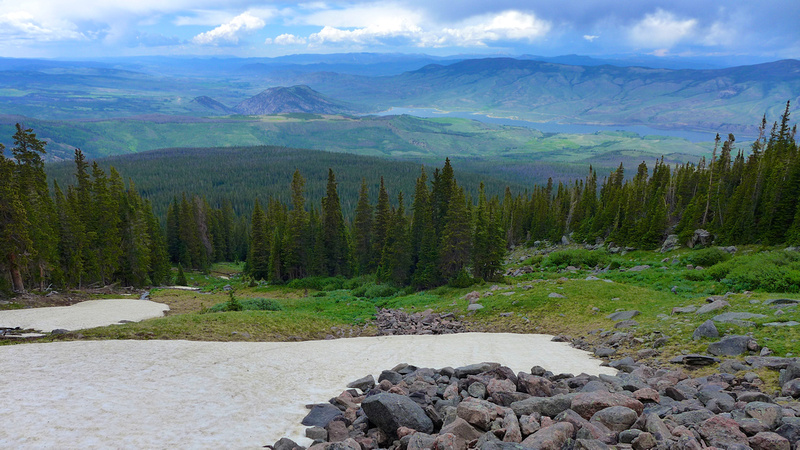 Finally above treeline. Green Mountain Res. in the distance. 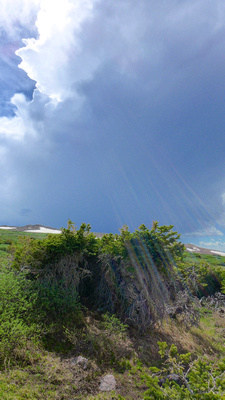 My tiny fortress in the midst of the hail storms. Not that it would have stopped lighting.

Finally above treeline panorama. Green Mountain Res. in the distance.

Yes, lots of lightning/hail/rain rolled through, on and off the entire time. Once I was above treeline, it was just plain dumb (most likely) but I just kept plodding along. It was stupid crazy.

Just before you get to Dora Lake, there is a sloped snowfield that skirts a rather steep-sided chasm. So right when you feel like your legs are gonna fall off, you gotta go up and around the snowfield so you don't make a mistake and slide off into oblivion. Fun times... 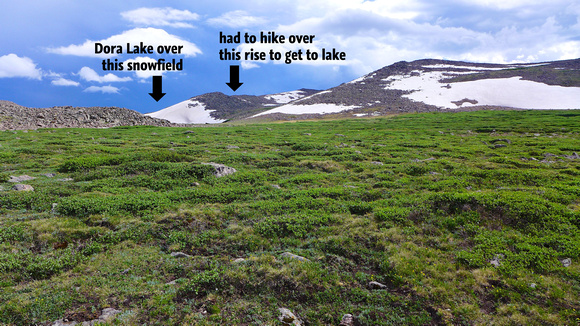 Wide "marsh" above treeline. In the distance is ridge above chasm leading to Dora Lake. 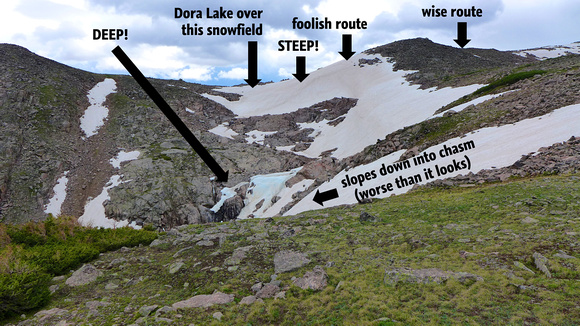 Dora Lake is over the snow-covered rise center frame. Chasm in between. 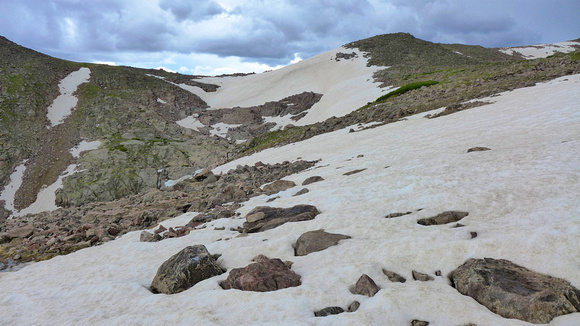 Snowfield slopes down into chasm to the left. Sketchy. 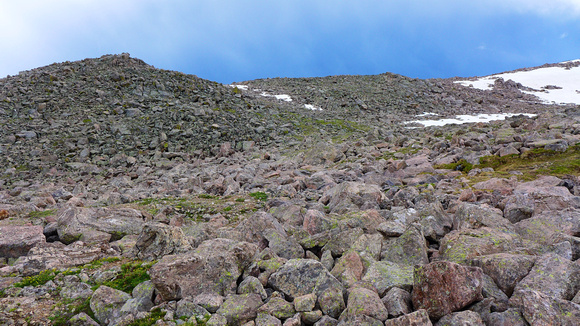 The final saddle. Had to go this route to avoid snowfield and chasm.

But somehow, when you (finally) top the final rise and Dora Lake comes into view, all the pain numbs just a bit, and that insane voice in the head of all landscape photographers says, "Yeah, it was worth it!"

My first view of Dora Lake! 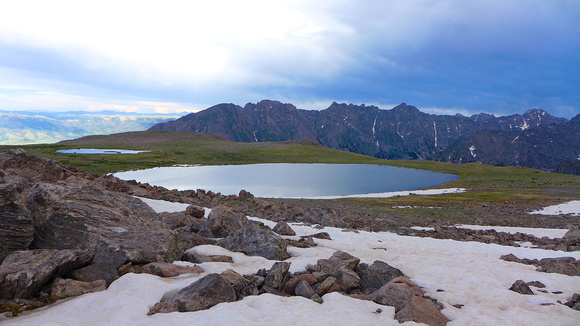 The bench that holds Dora Lake. 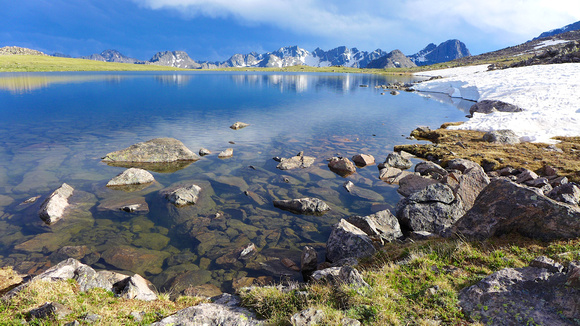 On the shore of Dora Lake. 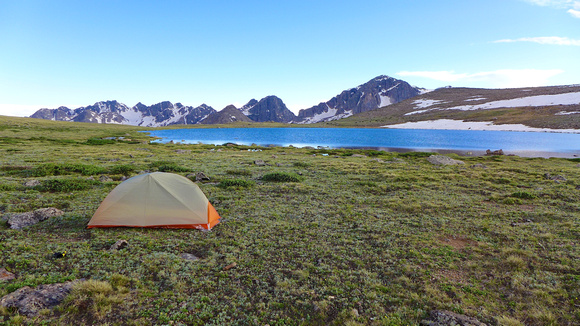 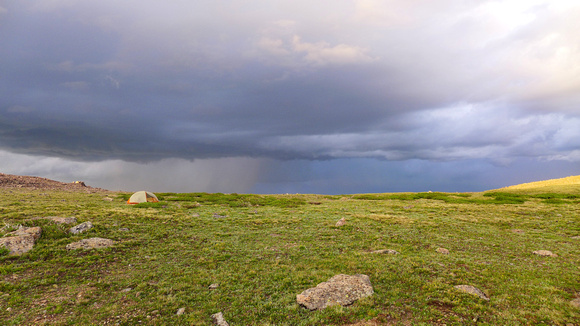 Storms at Dora Lake. Note my tent near the rocky rise at the left. 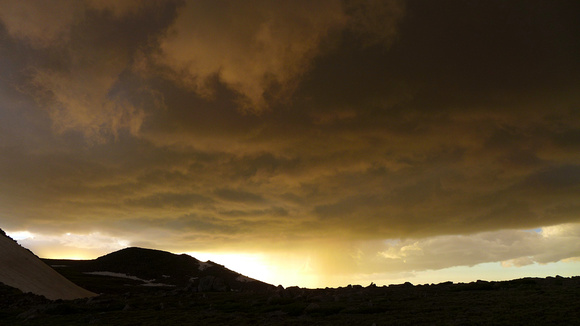 Dora Lake was beautiful. Remote. Unique. I loved the silent isolation of it. It's on a large, flat bench, so it feels like you're on top of the world. And you have it all to yourself... 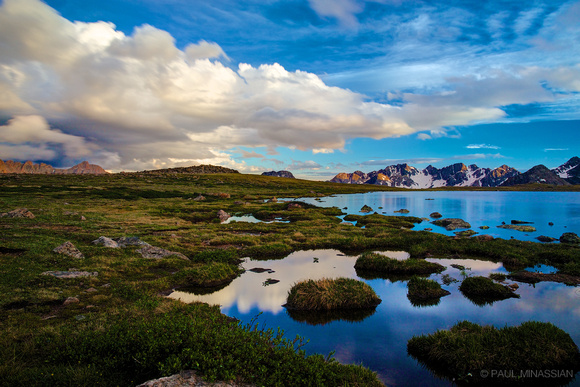 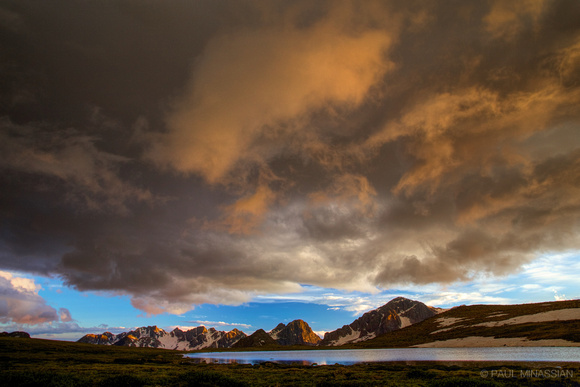 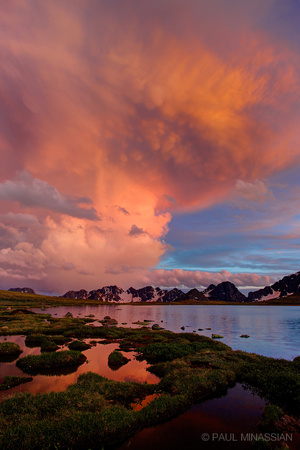 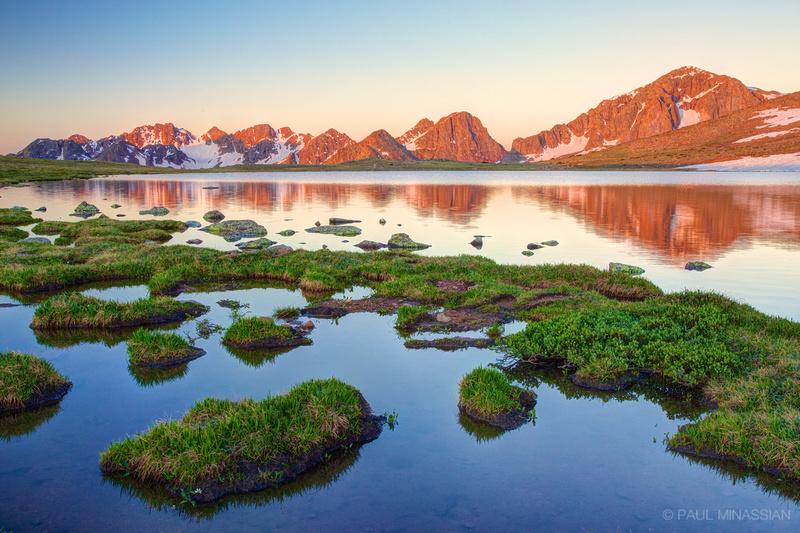 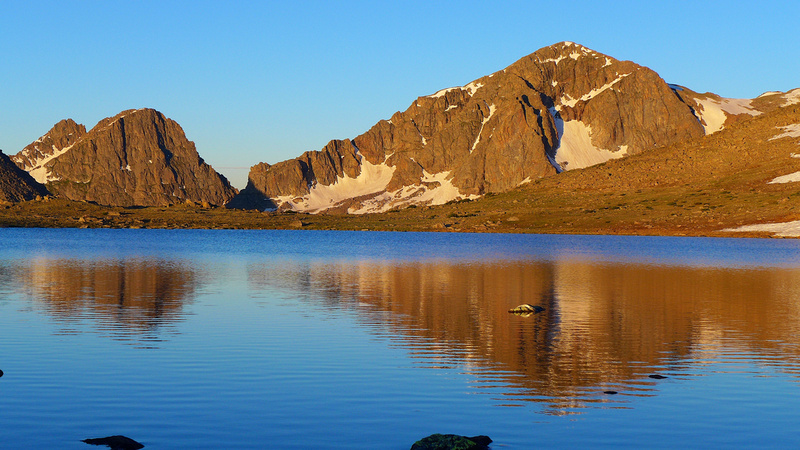 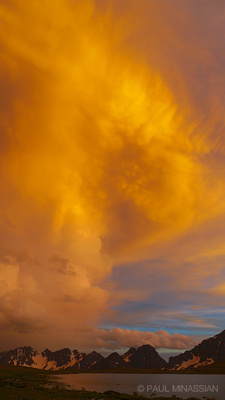 Groan. Grunt. Whimper. Down, down, down 4000+ feet. The very next day after going up. Yay. Going up I tried to stick to the creek. Going down I tried to angle to the left in the drainage to stay along the slight ridge, angling toward the trail (trying to hit it between Surprise Lake and the ridge above Upper Cataract Lake). Turns out the undergrowth and downed trees were worse that route. The mosquitoes were merciless. Utterly merciless. I couldn't stop moving else I'd get swarmed, but I desperately needed rest. I fell several times trying to lift my weary legs over the dead-falls. I kept going and going, wondering when I'd (ever) hit the trail...

Panorama of chasm and Dora Lake. 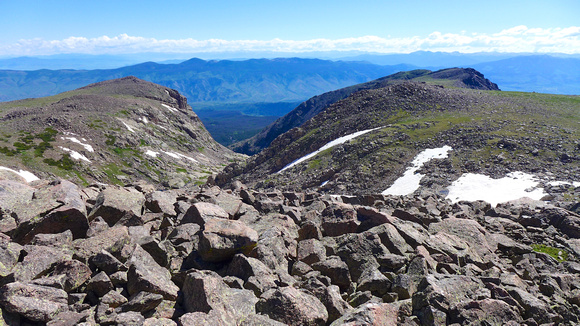 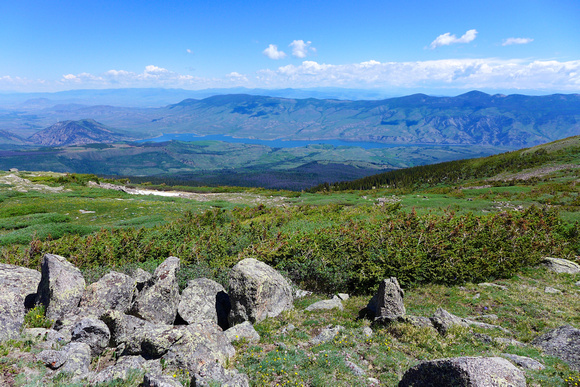 The way down. Green Mountain Res. in the distance.

The way down panorama. Green Mountain Res. in the distance. 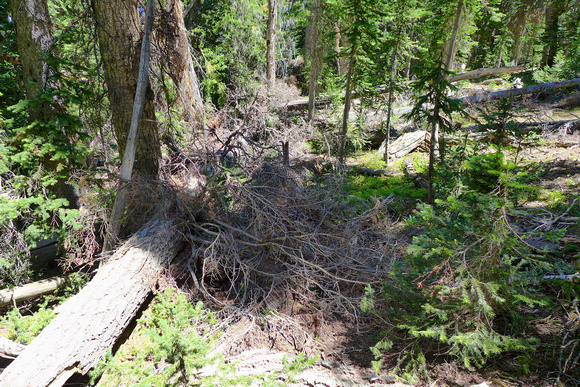 Insane undergrowth and dead-falls on the way back down.

For the first time in my life, I whimpered at the task at hand. I actually said aloud, "Lord, please get me out of this." I was literally running out of strength. Now, I knew the trail was before me, so I knew to just keep on going. But it really got me to thinking. I wonder what it's like for those lost in a jungle with no idea of where hope lies. Or those lost at sea with no idea of what direction to go to find salvation. Or even those who face such brutal circumstances in life that they just want reprieve, but there doesn't seem to be any hope on the horizon. And I understood why some people in such dire situations must surely give up. I truly had a slight glimpse into how brutal it must be.

If you have people in your life who are lost in a wilderness, I cannot guarantee that you can save them. But you can offer them a beacon, a light to guide them. I am convinced it is nothing short of the love of Christ. To me He is the ultimate, unfailing Beacon. The eternal Light. But yes, a beacon of light. Hope. Rest. Because if my glimpse of hopelessness in the midst of that forest is any indication, we have people all around us who are petrified and falling over and over in the darkness. 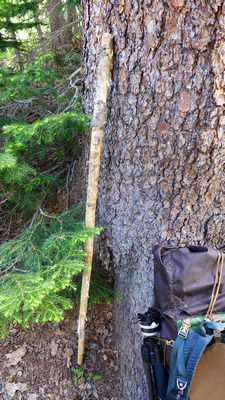 I need to take a moment to thank Rylie. Rylie really helped me through this entire journey. See, I had forgotten my trekking poles on this trip (NOT smart for such elevation gain). So early on in the hike, I spotted a pretty-close-to-perfect walking stick. Rylie assisted me all the way up, and all the way down. Rylie even sacrificed about 4 inches of length to save me from sure injury. When I was stumbling through the forest (on the way down) trying to locate the trail, I stepped over a large dead-fall that was right on the edge of about a 6-foot drop. I stepped onto a branch on the other side of the dead-fall, and it snapped, sending me careening forward, about to take a face-first, hard fall. Well, I threw out my arm holding Rylie, and Rylie took the brunt of it, and held me up long enough to give me time to spin around, tuck my shoulder and kind of roll down a couple feet. Saved me from a world of hurt. Rylie lost 4 inches at the top, but I brought her home and she now sits in honorable company with the other special walking sticks my daughters have brought home from various journeys. Why the name Rylie? Stands for Ry(an)L(ogan)(Jess)ie, my three wonderful ladies.

So after getting home, I figured there might be a better way up and down along the ridge I tried to follow on the way down. I made the mistake of turning a bit too far to the east (right) and ended up dropping down off the ridge before I wanted to. Turns out there is (supposedly) a climber's trail up that very ridge. Next time, I'm gonna try to find it. IF there is a next time — although it's a challenge I feel the need to embrace...